All images and text created by myself unless stated otherwise

A ghost lived once
inside this house
They say he murdered his kids
And then his spouse.

He fell in love
With someone else
He told his wife
Their marriage was false.

She went into the bathroom
And closed the door
She took the kids with her
She loved no more.

He went to find them,
The doorknob was hot.
He flinched and jumped back
As smoke billowed out.

He pounded on the door
Then kicked it down,
Looking for their bodies
On the tiled ground.

His face sizzled and burned
Before the fire went out
Then he was alone
He cried and shout.

He went to the hospital
For his burned face
They looked at him and whispered
His deformity out of place.

He suffered and grieved
In the old house he cried.
They made up a rumor
after he died:

A ghost lived once
inside this house .
He murdered his kids
And then his spouse.

That sound of the head hitting tiles, when you accidentally drop the corpse on the floor!

Yes, I’ve heard it before.

I’ve held a leg with no person, In a red bag.

The look of a body split in two, right down the center like a book open.

The coldness of a perfect infant body, alive no more.

Yes, I’ve felt it before.

The irony flavor of blood
dripping down my arm.

She ate out his heart,
Then his eyes.
Leftovers pushed down the stairs,
Gods prize

Like gelotanous globs, his eyes are stuck partially open by the edema. She stares at the figure. The swollen man’s head has purple tinged ears. Blood stains the sheets.

The words of the surgeon echo distantly in her head; “he is stable.”

She slinks to the bathroom for refuge, and a figure with sunken cheeks and blood red eyes reflects in the mirror.

She wonders if the man with coarse leathery hands will ever hold hers delicately again. But a claw grips her heart like a vice.

Elderly women whisper: “marry a man that loves you more than you love him.”

Fall in love, get married and have babies. This is the unspoken rule. This is how life is lived.

A husband, a wife, a house in the suburbs. Fulfilling Big Brother complete. This is what we display to the public, social normative behavior. Wouldn’t want to stand out.

In that house, hidden from the public view, depression, irritability, wild thoughts and obsessive behavior. Brilliant minds are partially revealed, but the invisible force of the fear of nonconformity drives us to shelter those ideas most objectionable.

But what about happiness? A secret love, a passion, something more. Don’t let them see it. It is not allowed.

Out of earshot rapid ideas are exchanged between lovers. The conversation is stimulating, exciting, brilliant. The chains of normalcy are broken, excitement reaches a climax, euphoria is found in forbidden love making.

A secret is kept, for now the lovers live in painful longing. The roles of the nuclear family continue. Big Brother smiles.The grandmothers are proud. Conformity complete.

All people have a comfort zone and a safety zone. What they fail to realize is, they aren’t the same.

Just south of the college campus on Route 93, Kelsey stood on the side of the road. Massachusetts was beautiful during the fall, she thought. The smell of leaves just changing colors and the satisfying crunch underfoot should be soothing.

Cars and trucks whizzed by, but no one stopped. She felt the pull of their wind with each pass.

Cradling her bags in her arms she thought of the win from last night. Fiercly competitive, the thought brought a smirk to her face. This was the smirk everyone knew her by. Winning was how she lived. School, work, beauty even in charity. The thought of ever causing pain to anyone caused a pang in her chest.

“Wherever you go, go with all your heart” she said aloud, one of her favorite mantras.

She started walking parallel to the side of the road. Watching the traffic. In the distance she saw a large tractor trailer. Perfect! This is just what she had been waiting for. As he got closer she waited, and then with perfect timing she stepped into his path.

Paul was hauling 80,000 pounds of rock salt that day. As he drove on Route 93 he had spotted several students. This was not unusual. Although the the road was busy and unsafe, students frequently walked the road and crossed to get to local stores.

He had spotted her from a distance and thought nothing of it. Until she stepped into the road facing him. Panicking, Paul breaked and swerved to the side. She had locked eyes with him and he couldn’t look away. Her arms were both raised, feet firmly planted, she looked like she was making an “X.” The look in her face was not panic or fear or sadness, just pure determination.

Her gaze only broke when her body made contact with the truck, she disappeared underneath the passanger door.

When the truck stopped, Paul ran out. The sight was horrifying. There was blood everywhere, he couldn’t see her face and she didn’t seam to be breathing.

The next moments were a blur. An ambulance crew had somehow arrived. “How do I tube her? She has no face!” Shouted one of them. The other shouting “just look for the bubbling air and put it in there!”

She was whisked away. Just her scattered bags marking the place she had just stood.

On arrival to the trauma unit she was unrecognizable. Her face pulverized mush. Amy stared at the bleeding flesh, and the single eye dangling horrifically down by its optic nerve. She would never forget that image.

(This is based on a true story, all names and places changed for privacy. )

The feeling of a cold gun
in my mouth.
Hope I don’t stop,
don’t cock
it the wrong way.
Miss my brain,
extend the eternal pain

by shooting my face off instead.

But once the it can be seen, once my nose is shot off and I’m blind without eyes and a jaw. that’s when they say, oh poor thing, she must be in such pain.

And then I want to stop care, they say ok, you should, you should die with dignity so you do not suffer. and I laugh without a mouth and no crinkle to my eye because my death is anything but dignified. 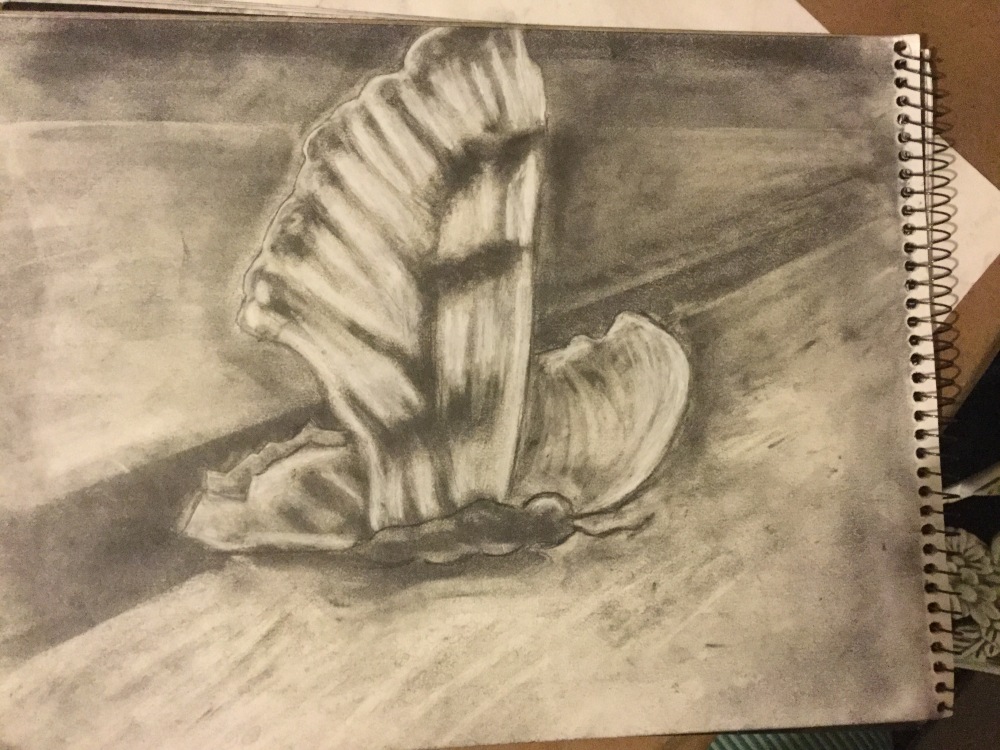 Death is a human construct. Animals don’t fear or crave it. They just kill and they just die. Of course they mourn, but they don’t lament their own death. Dream of it. Fear it.

We created death. We gave it to the devil and said, death is evil, we want to live forever. This is the curse of self awareness.

My dog always lives in the moment.

I always live in one of three, past, present, future.

She is happy, or sad or sleeping. She is not fearing her death. Fearing the future. She is not in pain. She has cancer.

When I got the news I was not upset. I love her but I said “ok.” Because death is not the devil, death is a human construct.

So is my heart cold because I am not sad? Because I am not afraid of a future without her? No, my heart is full. Tell me my dog will die in the future and I will say, “well I already knew that.” But here she is and here I am, and that has still not changed. She is happy napping and running in her sleep, and I feel the gentle breeze.

Where does dying start and living end? The reality is, we are all dying and living at the same time. They exist not one at a time, but simultaneously.

Where do we break? Between composure and infantile wailing? Euphoria and irritability? Comfort and pain? The pain that pushes you to the point where suicide makes sense. The threshold is lower in us. They try to raise it with pills and therapy and sunshine, so it can’t easily be breached, but it dangles over me, just out of my reach.

I jump for it over and over, wishing I had longer arms or legs. Sometimes I’m weighted down and can barely get off the ground. And if I’m lucky it soars out of sight and I am happy to not have it rest so close to my head.

That line, that threshold, the difference in us is that we see it. Discuss the risk and benefit, what society won’t admit. This makes us real. We do not pretend it is out of reach, that breakdown, that violence, that final breath. We know it is closer to us, our eyes are open.

Admitting it’s existence pushes the breaking point a bit further away. But it is still near. There is comfort where there is pain. It’s an angel and devil, not so far away. That lower threshold, some of us reach it anyway.

Staff walk hurriedly by, attending
To mysterious tasks that lie beyond
The realm of his sickness.

Monitor pings send her running for a nurse,
Nothing of consequence, finger movement
Has set the oxygen probe askew.

She concedes once again to straightening his sheets.

He and I know death is near
But unable to speak he stares blankly –
Her fallacy is hope.